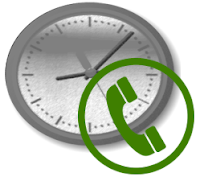 Officer posted abroad in a US Embassy will typically serve as Duty Officer at least once per tour. I think it can be best described as working at a 911 Dispatcher in the US, but instead in an embassy environment dealing with related overseas issues. For example, where one might call 911 to report an criminal activity, a medical emergency, or other concern, calls to a US Embassy may revolve around passport issues, immigration problems, medical issues, or inquiries related to family or friends traveling abroad.

FSOs, regardless of primary job or function, can be expected to serve as Duty Officer for generally a week, taking calls after-hours and on the weekend. Depending on the country, this can be relatively quiet. But if a frequently traveled destination or a country with a large number of resident Americans, this can mean many calls at anytime in the night.

Essentially, the Duty Officer plays the role of Consular Officer providing services for Americans. The majority of calls I've taken during my rotations in this role have often related to providing information that is generally available on the State Department's website under emergencies while traveling. Other times, it's mostly being the first point of contact for a caller to take information for further action by the Consular section of the embassy during normal business hours.

In the foreign service, it's often said that Consular Officers have some of the best stories as they routinely problem solve for Americans needing support abroad, and from my experiences, it has some truth in terms of some of the interesting anecdotes that you'll come across. I've taken calls related to immigration/visa issues, thefts, and passport inquiries but always usually have an interesting story to tell out of it.

Serving as Duty Officer in locations such as Thailand presents many interesting cases given the high tourist traffic and large numbers of Americans expatriating or retiring here. So in additional to the conventional calls that occur, there are many cases of people having issues with tourism scams, medical issues or deaths abroad, and Americans that may have been abroad a bit too long and are just looking to report things to the embassy or to have someone to talk to. It's an interesting job to do every couple of years despite the inconvenience of needing to be ready and on-call to respond to the phone at anytime of the night or weekend.

The Foreign Affairs Manual at 2 FAM 115.3-1 requires each overseas mission to have a Duty Officer. 7 FAM 117 goes a bit into describing the responsibilities of the Duty Officer and 2 FAM 113.8 explains what information should be in the guide for the Duty Officer. 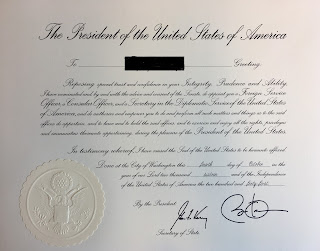 
Posted by SuitUpFSO at 4:47 PM No comments:

Star Trek or the Foreign Service? 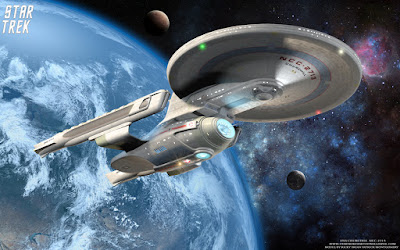 FS Blog, SuitUpFSO, 2016 July 18.  I have returned successfully from Afghanistan to Indonesia to provide support to the Mission before moving to my next assignment in Thailand.  I found Afghans to be resilient people and I hope my time there will make some meaningful difference as they continue against with strife and conflict.  I look forward however to new challenges to come.

A colleague of mine will sometimes admit to seeing her work in the Foreign Service, and particularly of USAID, in a comparison to Starfleet of the Star Trek universe.  Thinking on this and with the pending release of the next Star Trek film, I felt this was an interesting concept to consider.

The Star Trek mission is one of exploration and adventure.


Space: the final frontier. These are the voyages of the starship Enterprise. Its continuing mission: to explore strange new worlds, to seek out new life and new civilizations, to boldly go where no one has gone before.

However, the themes in Star Trek often involve humanitarian and diplomatic challenges with a healthy mix of issues such as human rights, racism, economics, and politics.

USAID's mission has a similar vein as follows:


We partner to end extreme poverty and promote resilient, democratic societies while advancing our security and prosperity.

The joint mission of State Department and USAID is:


To shape and sustain a peaceful, prosperous, just, and democratic world, and foster conditions for stability and progress for the benefit of the American people and people everywhere.

Personnel of USAID undertake 1, 2, or 4-year tours versus Star Trek's 5-year voyages, and the work involves meeting foreign government and host country people to learn their culture, perspectives, and languages while addressing very local issues such as economic development, governance and rights, or environmental issues.  USAID also frequently works in the more challenging developing countries with ways of living very different than that of the United States fitting the aspect of exploration and adventure.

But a key component to the comparison is the sense of community and togetherness, in cases called "esprit de corps", of the foreign service.  It's having a common purpose and circumstance where this small group of Americans are bound together in the Mission to achieve the objectives of our programs in strange and faraway lands.

Of course, there are many contrasts like how Starfleet is more of a United Nations organization but USAID is representing a single nation, albeit the US is a nation made up of a conglomerate of ethnicities and people with backgrounds from all over the world.  But I think there are still some strong, similar threads to the analogy.

Comparing the foreign service and Star Trek is a fun exercise that really helps highlight to me some of the most interesting aspects I find in the profession.  The camaraderie, the sense of mission, the travel to new and exciting places, and the challenge and adventure in trying to understand and make a difference for other people.

Well enough that.  I don't think this analogy was too highly illogical and I'm done givin' her all she's got.

Posted by SuitUpFSO at 5:35 PM No comments:

My tour in Afghanistan is rapidly coming to a close with just a couple weeks left.  The many goodbye parties have already begun and this will be the time to focus on finishing outstanding work and begin to transition away responsibilities and hopefully establish tools to improve continuity for those to come.

This second year was challenging in that many of the colleagues with whom you became close with and spent so much time suddenly switch out and you begin the process of starting over with the new people who have come.  Fortunately, there were great people, new friends and old, that arrived and I'm glad to have had the opportunity to meet, work, and live with all of them.  Kabul really is a unique place where you can form such close-knit relationships in a brief amount of time.

The last few months have been busy and exciting.  I took a trip back to the US and went on the first trip in a decade with my brothers, saw lots of friends, explored several of the national parks in the southwest, and had some great experiences at work.

The next chapter of my foreign service adventure will take me back to Indonesia where I will help support my old office for nine weeks on temporary assignment.  It will be great to see old colleagues and friends and it will reunite me with my wife.  Then, it will be a brief home leave back to the US for a couple of weeks and then off to the next big chapter beginning in Thailand.

I'm excited and anxious.  Let's do this!